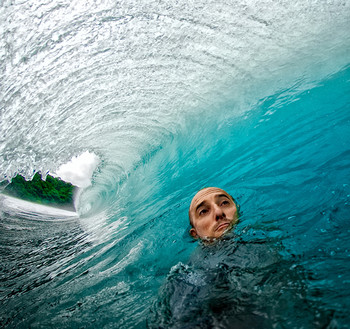 As a child, Anthony was inspired by photos in magazines depicting exotic places. The idea that an image can tell a story, create an emotion, and leave him with a sense of mystery intrigued him. He became fascinated with the idea of creating these images and finding adventure along the way.

Armed with a strong sense of determination to follow his dream of traveling the world and connecting to the natural earth, he landed a job as a staff photographer at Surfer Magazine in 2000. He spent the following twelve years traveling quite extensively, and felt like he was getting a better sense of the planet as it really is; both it’s design and fragility. He would visit a location, and then return years later to find that portions of reef had died off or its beauty had been tarnished in some respects.

Over time, he began concentrating his efforts on documenting the locations differently, not just shooting photos of the surfers in action, but capturing the natural beauty surrounding them as well.

After nearly 30 years exploring the world as a professional photographer, he still seeks to create that feeling he had as a child. Anthony aims for his photos to inspire people to seek adventure, to connect with the environment, to preserve the earth’s beauty, and ultimately, to truly experience our planet.